Home » Blog » RISC-V could tear down the walls at DAC

RISC-V could tear down the walls at DAC 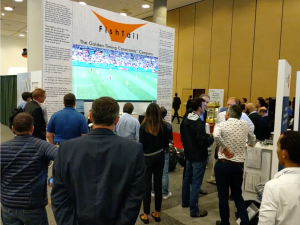 RISC-V was a major theme at DAC 2018. As part of the UltraSoC team at the event this year, VP of Business Development Randy Fish shares his thoughts on the encouraging signs of active cooperation in the semiconductor industry:

The UltraSoC team attended the recent 55th Design Automation Conference DAC in San Francisco, and was kept very busy…partly because we had a packed schedule of meetings (must remember next time to leave more time free for the technical sessions).

We had a busy time with the demonstrations on our booth, showing both run-control and processor trace of the RISC-V core together with traffic monitoring of multiple busses while both the RISC-V and Arm cores independently executed code. Although we were hosted on the RISC-V Foundation stand, there was significant interest in the capabilities of UltraSoC on other platforms (and in heterogeneous multicore environments), and in our demonstration of other UltraSoC analytic modules – showing how modules can be run-time configured for cross triggering.

Being on the RISC-V Foundation booth meant UltraSoC was at the heart of the action. There is no doubt that RISC-V is a hot topic right now. Cloud EDA resurfaced as a big theme with some of the big EDA vendors, now that it seems to be gaining momentum, even if as a concept it’s not exactly new. However, there was lots of interest in design in the cloud – not only the push from the EDA vendors, but it seems to be real now: Google, Microsoft, Amazon, Alibaba, and IBM were all present; more importantly many chip design teams are now comfortable with design being hosted externally. This has taken a long time and it is great to see this finally being realized.

But it was back at base, on the RISC-V ‘Pod’, where we experienced an exciting and frankly refreshing taste of what this industry is capable of: cooperation. Healthy and active cooperation amongst SoC, EDA and IP vendors and the end-user design community. We obviously see a very focused audience and heightened interest each time we participate in the RISC-V workshops, but this was different: at DAC, all parts of the industry took an active role, with joint presentations, lots of energy and significant talent being deployed to develop the RISC-V ecosystem and to make customer implementations successful.

This is refreshing because it’s so far from the walled-gardens and invitation-only closed booths we’ve all seen increasingly at these events. It’s been many years since we have seen this level of openness and collaboration — all for the ‘greater good’! I personally believe it’s exactly this collaboration which makes an event such as DAC even more valid. There are often questions about the future of DAC as there are with many of the traditional large trade shows. But when there is an intrinsic need for the industry to work together, as with an open architecture such as RISC-V, events such as DAC come into their own. As someone who has attended more DACs than I’d care to list, I truly hope that will continue to be the case!

The other theme that was pervasive was Artificial Intelligence, Machine Learning and Deep Learning (DL). Deep learning is being used in the full spectrum of EDA software. Potentially having a fundamental impact on how these tools perform and often completely hidden from the user. EDA has frequently pushed the leading edge, capacity and performance,  for many algorithms. In the case of deep learning, it seems like we can leverage much of the research and work done in other domains.

Other than increasing the collaborative side of DAC, can the show be improved? In my opinion, it needs to open its virtual doors…not just the doors to the Moscone Center. Design teams who would love to participate and who could add a lot to the event often simply can’t afford the travel time or the budgets to be at the show… but if its content could be streamed globally, with some degree of involvement for virtual participants, then this opens the show to a wider audience. Experience has shown that moving an event entirely online doesn’t work – but perhaps there’s more that can be done with DAC as EDA shifts to the cloud – let’s see how DAC can engage a wider, global audience.

Of course, in spite of the competitive spirit that exists, when the lights go down and the DAC social hour kicks-off, the show comes into its own as an incredible place to network and socialize. The Stars of IP event in particular proved to be a great place for mingling.

Given the global audience at DAC, the Football World Cup was ever-present – and adjacent to our stand we had sight of a giant screen (belonging to Fishtail Design Automation) …at times it was difficult not to get distracted!

Here’s to many more years of the industry coming together, to work together, at DAC…with open arms, open doors, and perhaps an open architecture!

Just prior to DAC, you may have seen that we announced that UltraSoC is incorporating parts of Imperas’ development environment into its tools. Please click to watch a short video of Rupert Baines at DAC talking about the benefits of the partnership.

If you’re going to the RISC-V Workshop in Chennai next week (18th & 19th July) and would like to meet with UltraSoC, then drop an email to: jo.windel@ultrasoc.com who would be pleased to arrange this.