…there’s a chasm, and more work is needed to bridge it 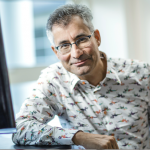 With any new technology, and particular with an open standard, the question of ‘are we there yet’ will always arise. And, of course, many never go anywhere.

Remember Bluetooth? It so far outstripped expectations, that it was difficult to tell which way it was heading; but today, its success and its huge growth and industry adoption cannot be questioned… hindsight is great, isn’t it?

Why compare RISC-V with a technology like Bluetooth? Well, they are both open standards of course – but also the industry is again trying something new: to turn perceived thinking on its head, to see if a non-proprietary platform can attract the ecosystem, the development, the robust standard, security, and of course, more than anything the support of the industry.  That backing includes R&D investment and trials – the backing needed to take it from the labs and into end products; it also includes getting sufficient financial backing from the industry, plus acceptance across software, design and other parts of the ecosystem, to build and maintain the momentum any standard needs.

If done well, like Bluetooth or Linux, an open system can find its way into billions of devices and reshape industries. Virtually all of today’s Internet and the trillions of dollars of value that enables runs on open source LAMP (Linux, Apache, MySQL, Python) platforms.

But success is not guaranteed: like Zig-wanna-bees and WiMAXes  – countless technologies end up consigned to the history books of brilliant, but sadly unrealized, ideas. There have been plenty of those in the hardware and processor space: even ones that had an opportunity, like OpenSPARC, died – for reasons that, in hindsight, are as clear as those which helped Bluetooth to triumph.

So, where is RISC-V on that journey?

Well, at the 8th RISC-V Workshop in Barcelona last week, I was impressed with the growing breadth of support for RISC-V. That support is coming from companies that will make a lot of difference to its adoption in certain parts of the industry – companies such as Google and Facebook are, unsurprisingly, two of the biggest influencers in the technology choices made by server developers.

All of the elements I mentioned – the ecosystem, the platform choices by the chip and system developers, the security, the software… the investments to make all that happen – they are a long way from the great idea to a commercial success and industry-wide adoption. So, the ‘are we there yet’ question is very relevant to RISC-V.

I don’t think RISC-V has quite crossed the chasm. Taking a step back from this Workshop, I would say there is still a feel of early adopters and evangelists, rather than pragmatists. We are getting there, and it is moving quickly. But the reality is we do need the industry to work harder to make it all happen.

There is another very important and slightly worrying trend I’m seeing: the companies driving this are in the USA and Asia (particularly China)… but sadly Europe is at serious risk of missing out. There are plenty of skills, technology and opportunities here in Europe to help take RISC-V across the chasm, but we’re just not witnessing the same level of engagement and interest in Europe – yet.  Indeed, even Israel. I think this might be the first technology I have been involved in where Israeli firms were not on the leading edge. Few were present at the Barcelona Workshop.

So how can I say ‘we’re getting there’? Well, within the space of 12 months, between the 6th Workshop in Shanghai and last week’s 8th event in Barcelona, the industry has gone from discussing the basics of the ecosystem, to discussing choices about implementation, a big discussion on security, and hearing about products already in development.

The Barcelona RISC-V Workshop itself was impressive: last week saw the largest turnout (320 attendees) for a workshop outside of the Bay Area. Just look at the proceedings. People are travelling from all over the world to get involved with RISC-V and to be part of the community. But it’s the growing breadth of the attendees and presenters which is more telling: companies from all parts of the industry – chip, design, system, even product level and some very big technology names including Western Digital, Facebook and Google (using RISC-V for its Pixel2 phone).

At UltraSoC we’re seeing it too: if we look back 6 months, we had lots of design partners signing up to work with us on RISC-V. Today, we have customers: and customers with ground-breaking designs based on RISC-V. In the last few weeks alone, we have announced two: Andes for its high-end AndesCore processor IP, and Esperanto with its AI Supercomputer on a chip using thousands of RISC-V cores.

But I would repeat that I still don’t think we have crossed the chasm. We are seeing the early adopters and we’re seeing the interest – but we’re not at the pragmatic stage. At last week’s Workshop, Western Digital, Microsemi, Google and NXP explained very powerfully how they see RISC-V and its strategic importance – but there are many companies who simply did not attend. It’s not just that they had not started projects: even attendance was a step too far for them.

And again, this applies doubly to companies in Europe: RISC-V is a great opportunity, but one that requires work – there are a lot of companies here in Europe who can help to get more momentum behind the standard and take it mainstream.

You can argue at UltraSoC we are hedging our bets – we support everything. An increasing number of designs will include different processors and even many of those companies most enthusiastic about RISC-V will still offer a portfolio. UltraSoC is passionately agnostic on processors, and a big part of the value we bring is the ability to mix different designs into one whole, as part of the way we solve systemic complexity.

But there’s no doubt that, with RISC-V, there is still work to do, particularly in Europe, to get us across that infamous chasm.

I am confident that RISC-V will happen. I can guarantee that it will be disruptive, with some big winners and losers. But what worries me is that given the lack of European (and Israeli) firms, by the time it takes off those companies will have too much ground to make up. And it will be yet another technology where Europe has missed out by leaving it too late to get involved.