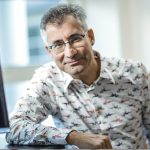 April Fool’s Day is not the most obvious choice of a start date for taking the helm in a growing, innovative technology company, but that is the hand that fate dealt me five years ago, starting as UltraSoC CEO on 1 April 2015. And what a journey it has been so far.

UltraSoC had been founded in 2009 and had much to offer in terms of cool technology. It had some initial customer traction. But back in 2015 it was staring at the crossroads with different paths it could take. In fact, the company was at a crucial stage in its growth, needing to take strategic decisions that would profoundly impact its future.

Having worked in the semiconductor business for decades, much of that time in and around VC-funded start-ups, I felt that I understood what it would take to take UltraSoC to the next level of success. Most importantly I knew we needed to leverage the solid base of technology we had, by building a skilled and supportive team who are all passionate about building a company together.

Today we’re getting towards 50 people, spread around the globe; we have in excess of 20 customers; and we have exciting new opportunities in cybersecurity, functional safety and data analytics. I’m proud of what we’ve achieved together.

So, what has changed in the wider world since 2015? We’ve seen the rise of RISC-V, which offers us a tremendous platform for innovation and collaboration. Not just technically, but also commercially: because it has the potential to change the business model of the entire industry.

In parallel, as chips have become ever more complex, we’ve seen a move away from a processor-centric view of the world, towards a true system-level view. It’s become a mantra for UltraSoC, and particularly our CTO Gajinder Panesar, that ‘it’s about the whole system, not just the core’. The emergence of AI and machine learning has contributed to that move – viewing a single execution unit in isolation is pretty meaningless in such systems.

But more generally, almost every design we are seeing is now “heterogeneous multicore” – all include multiple execution units, often based on different architectures – Arc, Arm, Cadence Tensilica, CEVA or RISC-V – plus hardware accelerators and custom logic.

That trend plays to UltraSoC’s strengths, because we’ve always been careful to stay independent and allow the customer to choose exactly the right combination of in-house and externally-sourced IP for their design. Heterogeneous designs are an ideal opportunity for us: being able to monitor each ‘block’ in isolation and also monitoring how they work together.

Another issue – and again one that plays to UltraSoC’s strengths – is the growing importance of cybersecurity everywhere. As our Chairman Alberto Sangiovanni-Vincentelli has observed: “In an age of autonomous vehicles, ubiquitous connectivity and increasing dependence on technology, cybersecurity is one of the top challenges for technologists.”

This focus is driven not just by ever-increasing threat levels. It’s also about the potential consequences of a security breach. The obvious example is in autonomous vehicles, where inadequate cybersecurity can literally be life threatening: there is no safety without security.

As it turns out, our core technology can make a substantial contribution to solving these problems. Our sentinel products sit within the underlying hardware, adding an extra layer of defense-in-depth to existing cybersecurity measures, with one big added benefit: they react at hardware speed. If we look again at the automotive example, the difference between reacting in milliseconds and responding in microseconds is substantial, and meaningful in terms of consequences.

At a business level, it’s been interesting to see the pendulum swing back to an ASIC-style model, and systems companies designing their own silicon. One of the problems that we wrestled with back in 2015 was the fact that our products are delivered as semiconductor IP, and yet the greatest benefits accrue further down the development and deployment cycle. We were asking the silicon team to spend gates to help out the systems integration and software teams further down the line.

As the value chain has re-aggregated, that problem has become considerably easier. Today, customers are routinely incorporating sophisticated data gathering and analytics features in their ICs to allow fine tuning not just of the chip’s performance, but of the end products in which they are incorporated: to make products “as good as they can be” on day one of launch.

Others are going further, and using our technology for optimization throughout the product lifecycle – whether that’s so that they can tune the performance of a data center or to perform preventive maintenance on a fleet of vehicles.

It’s been a stimulating, challenging and rewarding 1825 days. Actually, by the time this is published, I imagine it’ll be 1830 days or more… which leaves me with a final thought: nothing stands still, especially in the wonderful world of technology.