As we have celebrated the 50th anniversary of the lunar landing it’s been difficult to avoid the barrage of space-related stories in the media.

Some have re-hashed the technical details of the systems that were used both for the spacecraft and control systems which successfully launched men into space and brought them home safely. Others have provided fascinating insight into the psyche of the early teams of astronauts who were so keen to explore uncharted territory. Still others reminded us of the unforgettable moment when Armstrong took those first steps and fluffed his lines. And, of course, there has been some rekindling of the conspiracy theories that the whole endeavor was just a massive swindle on a global scale.

Particularly since Seraphim Capital recently joined our cohort of investors at UltraSoC in our latest funding round, we have been thinking about the cybersecurity of space-based assets and what role we can play in protecting them. 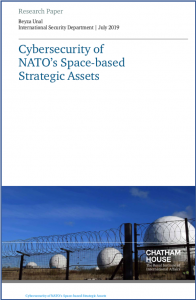 The general public is perhaps somewhat unaware of the extent of our societal reliance on space-based assets – from communication systems to weather forecasting, from routine civilian satellite navigation (which, with increasing levels of autonomy in vehicles of all kinds, is an absolutely critical data source) to complex military defense (and offensive) systems.

The Chatham House report points out that almost every strategic and defence operation is dependent to some extent on space-based assets and systems.  And it suggests that this critical infrastructure is particularly vulnerable due to a combination of factors – the use of old IT equipment, weaknesses in supply chains, failure to fix known vulnerabilities –  and that cyber attacks on these systems have the potential to create chaos.

Given our level of reliance on, and the criticality of, some of the applications, it is clear that improving how we defend these space-based assets is both urgent and important.

At UltraSoC we believe our technology can uniquely play a role, ensuring that systems can both detect and defend against attacks in real time. We look forward to working with our investors and partners to play our part in protecting citizens and space-based infrastructure. Dare I say – watch this space?!