Home » Blog » Automotive security: Computers on wheels and networks in the fast lane

Automotive security: Computers on wheels and networks in the fast lane

You may recall our successful Innovate UK grant application announced in July last year. UltraSoC, along with teams from Southampton and Coventry universities, and security consultants Copper Horse were awarded significant funding for the project to improve the safety and security of future connected and autonomous vehicles (CAVs).

Well, one of Copper Horse’s threat modelling analysts has just published an interesting perspective on the current complexity of vehicle electronics and in-vehicle control networks – as a prelude to digging into the security issues in future blogs. Here’s a flavour of some of its insights:

“One of the knock-on effects of cars becoming more computerized is that automobile electronics have jumped from representing around 15% of the cost of a vehicle in 1990 to an estimated 35% by 2020. Some analysts predict that the figure could be as high as 50% by 2030, when more advanced configurations such as LiDAR-equipped self-driving cars are expected to become more prevalent.”

Read the full blog here: Computers on wheels and networks in the fast lane 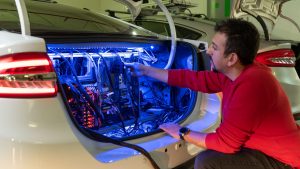